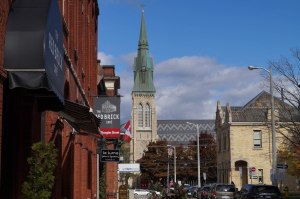 I was back at the Guelph School of Art (Guelph, Ontario) on April 13 & 14 for another botanical drawing workshop titled Brilliant Floral Portraits in Coloured Pencils. The first workshop in Guelph for 2019, the weather was still a little inclement but we brought a little summer into the weekend with my botanical project for the workshop, a Morning Glory vine (Ipomoea tricolor). We also worked on Alstromeria (Peruvian Lily) and Honeycrisp apple projects.

The Town of Guelph

Known as “The Royal City,” (named after British Royal Family monarch, King George the IV), Guelph was founded on April 23, 1827, and officially became a town on January 1, 1856. Guelph was chosen as the name for the town because it was one of the family names of British royalty and had, apparently, never been used as a place name before. Guelph is located in southwestern Ontario, roughly 28 kilometres (17 miles) east of Waterloo and 100 kilometres (62 miles) west of Toronto. The town is consistently rated as one of Canada’s best places to live and it plays a very important role in the history of Remembrance Day as Canadian physician, soldier, teacher and poet, John McCrae who wrote the poem “In Flanders Fields” was born in Guelph, Ontario, on November 30, 1872.

Above: Guelph School of Art

Coloured pencils are easy to use and convenient to store and replace. They can be used alone or combined with graphite.

Ipomoea tricolor ‘Heavenly Blue’ is a fast-growing twining annual or perennial native to the rainforests of South America. Commonly called the Mexican Morning Glory, the plant belongs to the family Convolvulaceae and has mid-green, heart-shaped leaves. The large, vibrant deep sky-blue funnel-shaped flowers only last a day (hence the name) before fading and dropping but other flowers follow in quick succession. The striking blue flowers have yellow throats haloed in white. and are up to 8 to 13 cm across (3 to 5 inches). The seeds of several varieties of Ipomoea tricolor are highly toxic and contain a naturally-occurring psychedelic or hallucinogenic product, (LSA), similar in effect to LSD. Seeds of Mexican morning glory were used by the Aztecs in shamanistic rituals. Ipomoea tricolor ‘Heavenly Blue’ has been awarded the British Royal Horticultural Society (RHS) Award of Garden Merit.

We spent the first day of the workshop developing the drawing and working from my step-by-step instructional pages. Students produced a sketch of the plant followed by a grey monochromatic (one colour) tonal drawing. The base undertone was rendered with grey coloured pencils prior to adding colour layers. I used Faber Castell Polychromos coloured pencils throughout the project, although some of the students came with Prismacolor Premier coloured pencils which were cross-indexed to match the right colours.

The workshop covered techniques such as burnishing, blending and layering with coloured pencils along with accurate colour matching, tonal rendering and composition. I used detailed step-by-step instructional handouts, demonstrations and one-on-one interaction with students to complete the botanical projects.

Below: Work in progress.

Below: Detailed step-by-step handouts take students through each phase of the project, from beginning to completion.

Below: This method of instruction shows how accurate the reproductions are and how efficiently students can learn various techniques used in botanical art.

Below: Completed morning glory on the left; drawing in progress on the right.

Below: The second day of the workshop was taken up completing the morning glory vine before moving on to the Alstromeria and/or apple projects. 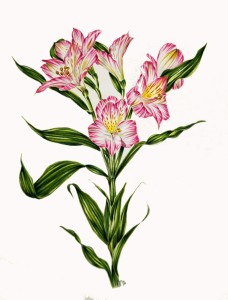 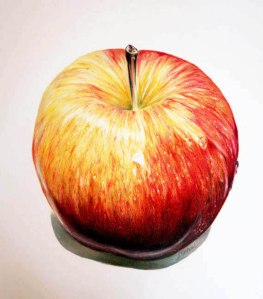 Above: Student Alstromeria projects in progress.

Below: Apple in progress. 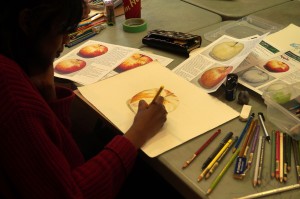 My next workshop titled Botanical Drawing — Apple in Coloured Pencil  — is on May 11 at the Elora Centre for the Arts.

Hope to see you all soon!