Once more I was back at Southampton Art School & Gallery in May to teach a two-day botanical drawing workshop titled, How to Draw Plants & Flowers. It was a beautiful, sunny weekend and we had a good turnout for the event.

What a glorious sunset! The beauty of Lake Huron. 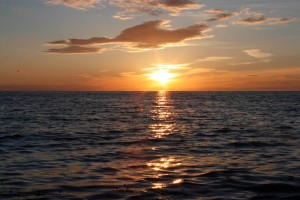 The town of Southampton is located at the mouth of the Saugeen River on the shores of Lake Huron, in Bruce County (Ontario), and is one of my favourite places to visit during the summer months. It is a popular tourist and retirement destination and known for its magnificent sunsets.

Southampton Art School and Gallery can be found in the heart of downtown Southampton and a short walk to pristine, sandy beaches like the one shown above. The facility provides a wonderful teaching environment and also a gallery showcasing regional and local talent. The building has been around since 1957 and is an integral part of the art community of Bruce County. The original community was known as Saugeen by the early settlers but was later named Southampton after the English seaport, when the town was incorporated as a village in 1858. It was later incorporated as a town in 1904. Southampton was also  one of the last communities in Ontario to use the Gaelic language in everyday speech; the language could still be heard by local fishermen as late as the 1930s. Just off the Southampton shore, the Chantry Island Lighthouse is a popular visiting spot for tourists. Boat tours to the island run throughout the summer months. As well as Chantry island, the town is close to Sauble Beach, Port Elgin and Saugeen First Nation.

School (above) and gallery and art centre (below). 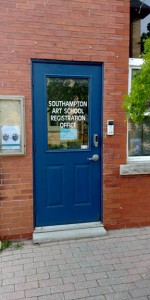 How to Draw Plants & Flowers

The workshop featured graphite as a drawing medium in botanical art. Students were given step-by-step instructions along with exercises on gesture, contour drawing and blending techniques to produce realistic botanical drawings. The projects for the workshop included a fuchsia and Cattleya orchid.

Entrance to the school.

Below: Classroom set up on the first morning and ready to go.

The drawing process  starts with a series of gesture sketches and exercises to establish a good composition. Once the basic composition of the subject has been decided on, the next step is to produce a simple geometric framework of the plant as a base for developing the drawing. When the sketch is completed over the geometric lines, a final contour drawing completes the process prior to applying graphite tonal values. 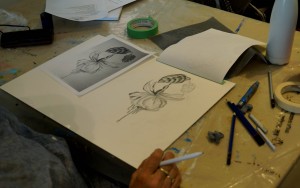 Above: Busy at work developing the value scale on the fuchsia.
Below: After completing a few exercise to get warmed up we started with the first project — drawing a fuchsia in graphite (see above and below).

Below: The Mono Zero (Tombow) 2.3 mm round tip eraser is perfect for highlighting detail areas such as along the veins of the fuchsia leaf.

Below: Student drawing shown next to my Fuchsia drawing handout. Step-by-step instructions provide a foundation for students to reproduce botanical subjects. 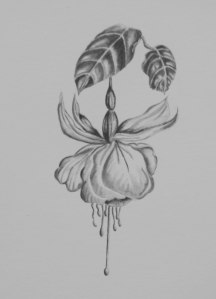 The next project on the second day of the workshop featured my Cattleya Orchid (originally completed in coloured pencil).
Below: Contour drawing of the orchid at the sketch stage.

First the basic geometry of the subject, then the contour or line drawing, followed by tonal rendering in graphite.

The Cattleya orchid is a striking subject for
a graphite drawing. 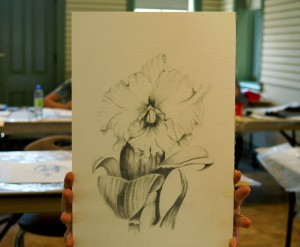 A small, portable easel provides the perfect angle for drawing. 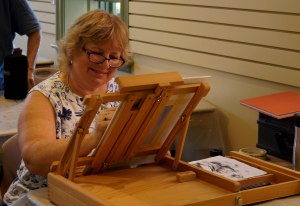 My next workshop titled Floral Portraits with Pen & Ink and Watercolour is on June 9 & 10 at the Elora Centre for the Arts.

Hope to see you all soon!